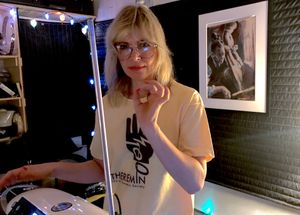 Lucky number 13 is my good friend Dorit Chrysler, a theremin wizard from Austria. She came to New York in the 90's and was the singer-guitarist for the scorching art-rock band Halcion. She subsequently went on tho become one of the world's premiere theremin experts. She performs at festivals and concert venues around the world on a regular basis, and she was the co-founder of the New York Theremin Society. She has scored films and TV sows, including the upcoming German production "M." for Netflix. She will be performing this year with the San Francisco Symphony as well as Moogfest in Durham North Carolina in April. We spoke about the music scene in New York in the 90's,plasticc molds, the legacy of Austrian culture, the "bread and circus" of American politics, and she performed three live songs in the studio.