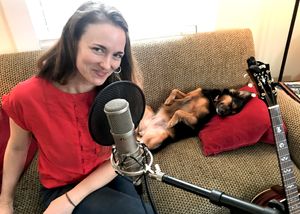 Guest Dawn Landes is talented multi-instrumentalist, singer-songwriter, and producer living in Nashville. We talk about climbing trees with Will Oldham, her touring with Sufjan Stevens, recording with Nashville A-listers, and why bow-hunters are more macho. She performs her original song "Keep on Moving."

Opening music: "Merchandise" by Fugazi, performed by Pierre de Gaillande with James Fletcher, drums. "Keep on Moving" by Dawn Landes, guitar and vocals. Other songs: "Sleigh Ride" by Bandana Splits. "Toutes Les Belles Inconues" and "For What it's Worth" by Dawn Landes. "Dark Eyes" by Will Oldham and Dawn Landes. "No Shade in the Shadow of The Cross (Live)" by Sufjan Stevens. End music: "Lazy Southern Song" by Melomane.