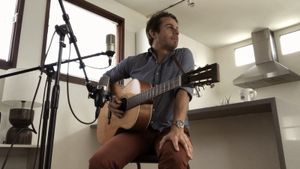 This episode's guest is singer, songwriter, musician and producer Michael Rosas. We have an in-depth conversation about growing up in Southern California, his foray into break-dancing, taking a knee, and wearing sombreros. We discuss his trajectory from the hardcore scene in OC to the band Smile, continuing with Satisfaction, Flying Sparks, and into his solo career. He performs two great songs; a cover of Bill Withers "Take It All In And Check It All Out" and his original song "American."