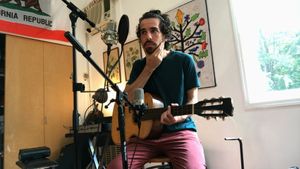 Guest Dylan Nowik  is a singer/songwriter, multi instrumentalist, sound designer, and composer. We talked in the California Hill cottage about the world without humans, singing to statues in the forest, and the hopefulness of the rubber band concept. He performs two original songs; "Television Eyes" and "Mary."