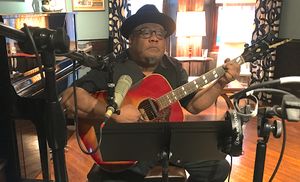 Stew is a singer, musician, composer, playwright, and a powerhouse in the world of music and theater. For years he fronted the band Stew and the Negro Problem. He then went on to create and star in a play called Passing Strange which started off-Broadway and then went on to have a successful run on Broadway, where it garnered multiple Tonys and other awards, and was eventually turned into a feature film by Spike Lee. In all of Stew's work, he shines a bright light on what it means to be an African-American guy with a killer sense of humor and an acute sense of history and culture, in a world that wants to reduce everyone to stereotypes. Stew performed a live acoustic rendition of his song "Baldwin Country" and we spoke about "asshole-adjacent people," the role of comedy in music, the American vs European idea of freedom, what Reagan would say about today's mess, his ongoing collaboration with partner Heidi Rodewald, the audacity of craziness, and so much more.