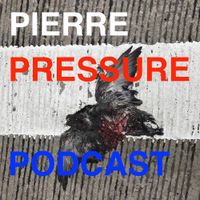 Pierre de Gaillande is jumping into the world of internet radio, aka podcasting, aka interviewing people on the web. PIERRE PRESSURE PODCAST IS HERE!

Pierre interviews a different musician each episode, and pressures them into playing a song or two that resonates politically. Each interview touches on the guest's musical, artistic, and personal trajectory, and delves into the intersection of music and politics in these Divided States.