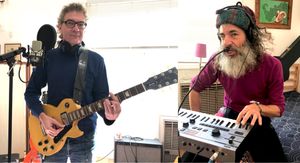 A very special double episode with Fa Ventilato and Roman Elsener, two Swiss-born, New York-based musicians who have been close friends since their youth and have very different approaches to life and music. We spoke about micropolitics, CD scratching, pillow drumming, hand grenades, the Swiss national anthem backwardt, and much much more. The Ramen and Pho Orchestra performed Roman's original songs "President Fast Food" and "Sailing Out to Sea" (including a seventeen-piece whistle orchestra) as well as a sprinkling of other original improvs and tidbits. Strap in for this one people.