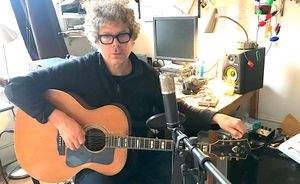 This episode's guest is my good friend and musical collaborator Christian Gibbs. Also known as C. Gibbs, he's a ridiculously talented singer, songwriter, guitarist who's been crushing it for decades. His numerous band and solo projects include Morning Glories, C. Gibbs Review, Lucinda Black Bear, He Arrived by Helicopter, and others. He had a stint on the Broadway show Passing Strange and continues to record, tour, and perform. We talked about squatting in London, shitty gigs in Germany, getting a murse from Spike Lee, talking to your conservative parents abut politics, getting your pod stuck on stage, competing with a youthful package, and a whole lot more.