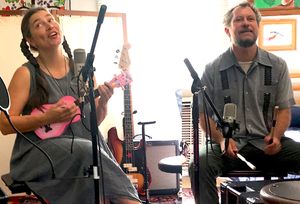 Episode sweet sixteen features Los Angeles-based activists, musicians, filmmakers, and educators Lisa Marr and Paolo Davanzo. They run a non-profit called the Echo Park Film Center, and they travel the world spreading their vison of inclusiveness, tolerance, creativity and artistic freedom through the medium of cinema. We spoke about both of their musical and artistic trajectories beginning in Canada and Italy, through the wilds of the Orange County punk MIASMA and the Canadian riot girl scene. We chatted about striving for socialist idealism in a capitalist world, the circus of American politics, the short life of the Sassy Pickles, the film mobile, bicycle-driven projection, cuddle core, and so much more.