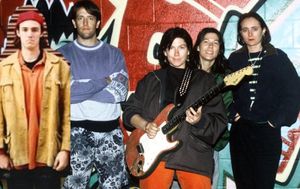 For this very special episode, we reach way back into the vault and present an interview Pierre did with The Breeders in 1992! We unearthed this cassette recording of an interview with all four members of this massively popular and influential mainstay of 90's alt-rock, the Breeders. Pierre called them from San Diego and interviewed them on the phone in their hometown of Dayton, Ohio, in advance of their concert in Tijuana, Mexico, at the legendary Iguana's. The year is 1992 and the Breeders are on the verge of superstardom. Pierre is a college student calling from San Diego and he's quite sleepy, but he's awake enough to ask some pretty incisive and trenchant questions, including "Who will play you in a movie of your life" and "Will Bill Clinton be elected?" Listen as young Pierre tries to play it cool on the phone with all four members of the Breeders; Jim McPherson, Josephine Wiggs, Kelly Deal, and Kim Deal.