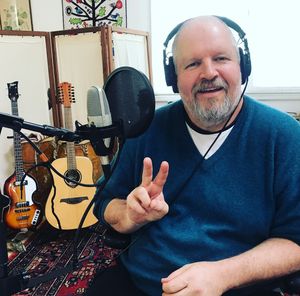 Chris Wells is the founder of The Secret City, and he is a high priest of art. He's been known to tower over people in platform shoes, he leads a congregation of art worshippers, his performances make people feel high, and he was raised in the high desert of California. In this episode we discuss what it means to create transcendental, communal gatherings outside the umbrella of "church."  We talk about the somatic response of fight, flight, or freeze, trying to heal the wounds of empire, gay politicians wearing "straight-face," people who let their dogs lick their face, and the performance of being a Reagan-loving, church-going young man. We also discuss Chris' journey into being a radical fairy, dissect the so-called Irish potato famine, queers in the woods, gay liberation not assimilation, and his ongoing mission to bring art-based, ecstatic spectacle to a divided world. A lot of ground is covered!

Episode sponsor: Cats Who Can Type. Opening music: Marchandise by Bad Reputation (French cover of Merchandise by Fugazi). Pixxlatd Cock by Pierre de Gaillande. Songs: Famine by Sinead O'Connor, Hold Me Baby by Christie and the NoNos, Compared to What by Les McCann and Eddie Harris. End music: All One by The Snow.