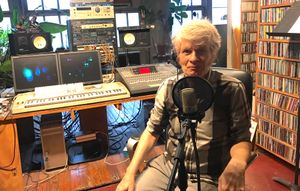 Composer-producer-frontman-wizard JG Thirlwell has been making astonishing, orchestral, bombastic music for decades. Born in Australia, he teamed up with Nick Cave and the Birthday Party, then joined Prag VEC, and soon formed his enduring solo project Foetus. Operating under plethora of pseudonyms and monikers meant to confuse, shock, and awe, Thirlwell continues to churn out an astounding amount of music and to perform as a frontman for his own projects, as well as a composer for animated series Venture Brothers, Archer, and Dicktown. We talked about his beginnings in London, moving to New York in the early 80s, starting out using 16 tracks of tape and an elaborate numerical system, his first time wearing "guy liner," the importance of remembering World War Two, his evolving theories on shock value and fear as a part of performance, and his changing relationship to his Australian roots as a citizen of the world.

Episode sponsor: Crazy Eddie's. Opening music: Marchandise by Fugazi, performed by Pierre de Gaillande with James Fletcher, drums. Songs: Courtyard Dogs, Moths, and Witchmarket from The Blue Eyes Soundtrack by JG Thirlwell. Your Lazy Lay Lay by Prag VEC. Is That a Line, What Have You Been Doing, Water Torture, and Danger Global Warming by Foetus. Fun House by Birthday Party. Delights of the Garden by Last Poets. Oilfields and I'll Meet You in Poland Baby, orchestral live performances by JG Thirlwell. Motorslug by Wiseblood. L'espion Qui a Pleuré by Steroid Maximus. A Plastic Island in the Pacific by Manorexia. Spag from Venture Brothers Soundtrack by JG Thirlwell.